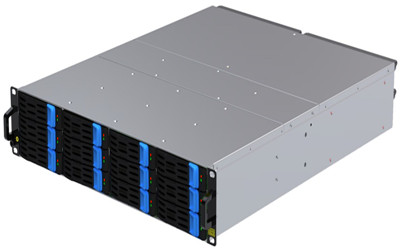 The ZXCLOUD KS3200 storage system is a product that has high cost effectiveness and telecom-class quality, which is oriented to the enterprise-level storage application. It is mainly used for applications of enterprise users such as massive data storage and hard disk data backup, involving HD/SD program manufacturing, multimedia video data storage, IPTV, video surveillance, SME DB, file archiving, and data backup. It can be used to industries such as telecom, Internet, broadcasting and TV, government, education, public security, and SME.

It supports the multi-level expansion (at most one controller enclosure plus ten disk enclosures) function. It also supports 252 hard disks.

The product is designed in total redundant module mode, which has dual active controllers、the 1+1 redundant power and fan modules.

It has the industrially-advanced C2F permanent data power-off protection technology, and its system availability reaches up to 99.999%.

Unified remote O&M solution: The product has the built-in Web management interface, so it is unnecessary for the maintenance person to reach the spot.

The product uses the industry-advanced hard disk deceleration and hibernation technology to reduce the power consumption.

The CPU has the smart frequency conversion, smartly adjusting the CPU working frequency according to the service pressure.

Latest Function
If you want to know the latest functions, please send email to SDNFV@zte.com.cn to apply for VIP user.
Major Function