Recently, it was learned from the OpenStack Foundation that in the just-concluded election of the Project Team Leaders (PTLs) of OpenStack Train version, ZTE technical experts were elected PTLs in six official OpenStack projects. The number of projects that ZTE was elected as the official project PTL ranked second in the whole community (the first telecom equipment supplier), fully demonstrating the strong technical strength in the open source field. 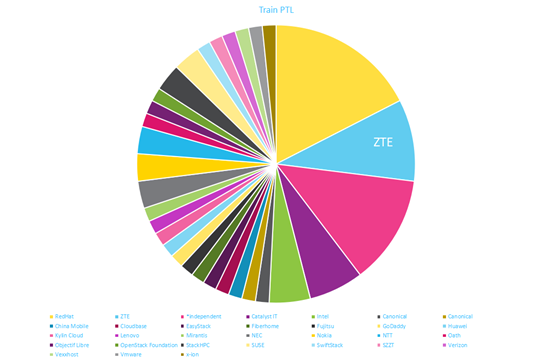 OpenStack is a system formed by the integration of various functional projects. The governance of each project is that a core team consists of core contributors that have the rights to control integration of codes through the review flow. The team also controls the technical direction of the project. As the general supervisor of the project, PTL is selected from the core teams. Before the start of each OpenStack version cycle, the developers who have code contributions in each project vote to select the PTL for this version of the project.

Since 2016, ZTE has invested a lot of resources and manpower into the open source community, and its contribution in the OpenStack community has been rising. In particular, in the recent three versions (P/Q/R), ZTE is ranked in the top five and the number of the highest contribution times is in the third. ZTE currently has 13 core contributors including the above PTLs, covering 11 official OpenStack projects. The election of PTLs has further enhanced the technological influence of ZTE in the community.

In the future, ZTE will continue to invest a lot in the OpenStack community, especially to make contribution of more new functions from actual commercial needs, thus helping OpenStack further improve its maturity and accelerate the commercialization of important application scenarios such as NFV, edge computing and 5G.