The traditional communication network is mainly constructed for the communication demands between people. With the massive demands of the vertical industry of Internet of Everything, the process architecture of binding traditional network software with hardware and solidifying between the networks can no longer meet the requirements. To address these new business demands, 5G core network relies on the core idea of Cloud Native, through the service-based network architecture, network resources can be sliced, and control plane and user plane are separated. In combination with cloud technology, a customized, exposing, and service-based network is achieved.

5G core network has been reconstructed to redefine the network entity in the form of Network Function (NF). Each NF provides functions by independent functions (services) and can be called from each other, thus achieving the transition from a traditional rigid network (fixed functions of network elements, fixed connections between network elements, solidified signaling interactions) to a service-based flexible network. 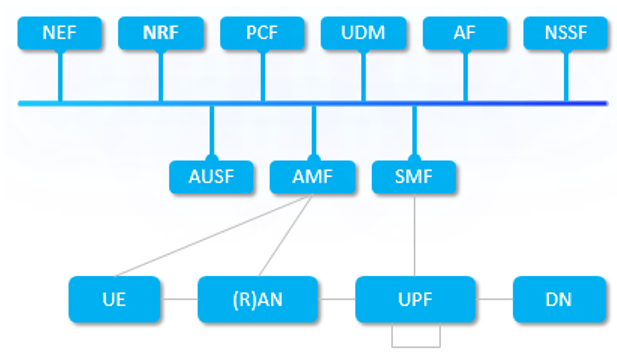 Similar to the SOA/MicroService architecture concept in the IT Domain, 5G core network introduces a new network function entity (NRF), which provides functions such as network function entity (NF) service registration management, and NF service discovery mechanisms. As a consumer, NF entity only needs to find the applicable target NF/NFS through NRF. The core network is automated through this service mechanism so that the NF instance or NFS can plug and play.

The network function entity under the 5G SBA architecture can be automatically registered to the NRF as a function service provider, and any NF entity can obtain the service and use the service by initiating a service request to the NRF. To ensure network security, 3GPP defines security-related specifications (such as 33501), restricting the use of network functions only to authenticated or secure entities. The access security methods are as follows:

A security access rule is configured on the NRF side. When the initiator NF initiates a service request to the NRF, the NRF determines whether the request can be authorized according to the rule. The NRF returns the target network element related information only after the authorization.

NRF, which is regarded as the authorization server, provides the oAuth authorization service. The service provider needs to pass the NRF authentication and exchange certificates. The initiator NF needs to first obtain the dynamic token from the NRF, and then bring the token to call the service to the target NF. The target NF determines that the TOKEN is legally valid before providing the service.

In 3GPP R16, the 5G core network architecture is further evolved into eSBA by SBA, mainly adding the following functions:

Similar to the Service Mesh architecture in the Internet, the routing policy and management functions are provided by the new SCP (Service Communication Proxy). Therefore, each NF can focus on the realization of the business function, and the functions such as the routing control are uniformly implemented by the SCP.

In summary, the SBA architecture of 5G core network is a major innovation in the next-generation network architecture. It has the advantages that are not available in traditional networks such as flexible and open, and it is an important basis for quickly meeting the needs of various industries. With the large-scale deployment and commercialization of 5G networks, on the basis of 5G networks, applications based on the Internet of Everything will inevitably emerge. As a leading 5G end-to-end solution provider, ZTE is leading the 5G innovation and deeply understands the evolution of the network to continuously escort future network communications.