Does Traditional SMS “Disappear” in the 5G Era?

How many unread messages have you piled up in your SMS inbox in 2019?

According to the data from Ministry of Industry and Information Technology (MII), from January to October 2019, China’s mobile SMS service traffic increased by 40.8% year on year, and the revenue of mobile SMS service reached 32.5 billion Yuan by up 2.4% year on year. SMS continued the warmer trend of 2018.
When you see such statistics, a big question mark will appear in your mind: Who sends short messages now?

At present, fewer and fewer users communicate with each other through SMS messages, but more and more enterprises are becoming the users who send short messages. Therefore, the increment of SMS is not actively made by users for their active applications but for their passive applications. Think of these scenarios in our daily life: Use one APP to receive notification short messages including registration or login verification code SMS, password retrieval SMS, express retrieval SMS, and railway ticket success SMS. You can image that there are too many short messages around us.

But why are traditional short messages used instead of other methods?

How much does an APP provider invest in the SMS service? Cheng Wei, CEO of Didi Chuxing, said in public that Didi spent nearly 900 million Yuan on SMS in 2018.

How to develop traditional SMS messages in the 5G era?

2019 is the first year of commercial use of 5G, and the 5G era is about to be fully launched. As one of the basic communications functions, how can traditional short messages be transmitted? How are industry standards defined?

SMSC that is shown in the above figure is an NE existing in the 2G era. It is mainly used to store and forward short messages. It interacts with peripheral NEs based on traditional MAP protocols, and has a large number of NEs in each carrier's existing networks. For the evolution of 4G network, the interaction between NEs is based on the SIP protocol. The IPSMGW NE is added to implement codec conversion between the SIP protocol and the MAP protocol, thus avoiding the cost and impact caused by upgrading the SMSC in the existing network. For the evolution of 5G network, interaction between NEs is based on the HTTP2 protocol. Similarly, 3GPP adds the SMSF NE in 5G core network to implement the codec conversion between the HTTP2 protocol and the MAP protocol. As can be seen, SMSF serves as the interface and bridge between 5G core network and the traditional SMSC for receiving and sending 5G NAS messages.

Figure 2 SMSF and Its Peripheral NEs 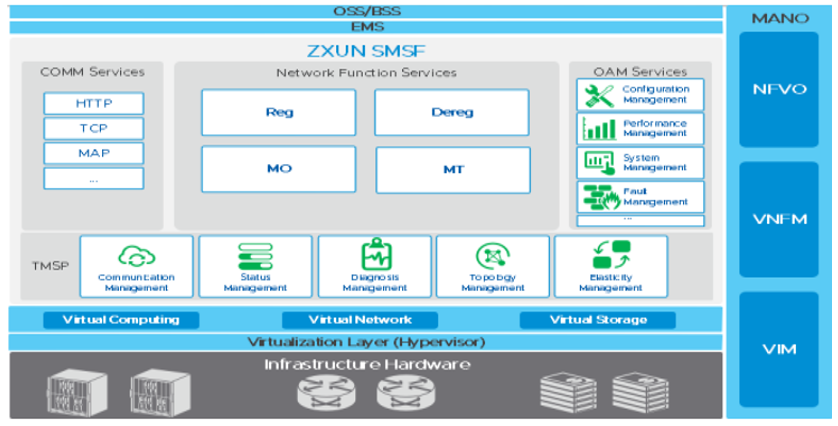 ZTE provides SMSF products in the 5G core network. These SMSF products comply with 3GPP R16 specification and compliance evolution, support registration and discovery of the NRF service, interaction between SBI and AMF and UDM, and interconnection between protocol interfaces such as traditional MAP and SMC/IPSMGW to provide the NAS message service for 5G user terminals. In addition, SMSF has the following enhanced capabilities to provide operators with faster, better, stronger, and more stable service capabilities: