I.    Why needs to define distributed storage by using “software”

Block Storage, which serves as the "main battlefield" of the enterprise storage market, is used by the virtualized cloud platform and database applications of a large number of users to implement data persistence based on block storage. With the rapid development of the Software Defined Storage (SDS) technology, Server SAN (Distributed Block Storage) has also ushered in rapid development.

In China, IDC pointed out that in the first half of 2017, Server SAN had accounted for 27.5% of the market share, with a year-on-year increase of 6%. From the perspective of sales growth rate, Server SAN grew in Q2 of 2017 by 128.6% year-on-year, much higher than the growth rate of FC SAN+IP SAN 13.3%.
The mainstream Server SAN has already supported a wide range of virtualization platforms, database applications and OpenStack. Thanks to its rich functions, high scalability, ease of use and continuous decline in TCO, Server SAN has been widely used in databases, cloud desktops and carrier-class core services.

In terms of scalability, Server SAN linearly increases with nodes. In terms of reliability, hardware does not need data migration, and the downtime of faults and capacity expansion is reduced to the minimum.

II.    What can be brought by distributed storage to cloudified core network?

Storage virtualization in NFVI has the following application scenarios:

Compared with traditional disk arrays, distributed storage has the following advantages in view of the actual requirements for telecom network element applications:

The data redundancy mechanism of the distributed storage system is provided across nodes, which ensures that data is not lost when multiple nodes in the cluster break down.

In an NFV infrastructure production environment, a power module, switch, host, or disk fault is a probability event. In a telecom cloud resource pool, different power supply zones and multiple AZs are allocated for disaster recovery. In a distributed storage system, a domain-based management policy is used to isolate redundant copies of data to different AZs. Logical isolation ensures that hardware damage has the minimum impact on services. The redundancy of traditional disk arrays is made in a single device, and these redundant data is in only one breakdown domain. Due to the limitation of the number of controllers, different fault domains such as cabinets, racks, and equipment rooms cannot be used, so the reliability is low.

Distributed storage provides a unified O&M interface, which is simpler and more efficient than traditional disk arrays for heterogeneous devices of different vendors.

Ceph-based distributed storage, which is more stable and reliable for Openstack, occupies fewer virtualized computing node resources, and is more compatible with the Openstack virtual layer of other manufacturers. Traditional disk array drive components are privatized, and the interconnection compatibility verification of virtual layers of different manufacturers has a great deal of workload, which needs full test coverage.

ZTE Distributed Unified Storage Platform TECS CloveStorage, which is based on the mainstream distributed storage system Ceph in the industry, makes use of its high performance, high reliability and high expansion design concept, and organizes the local storage resources of general hardware into a fully distributed storage pool through the system software. 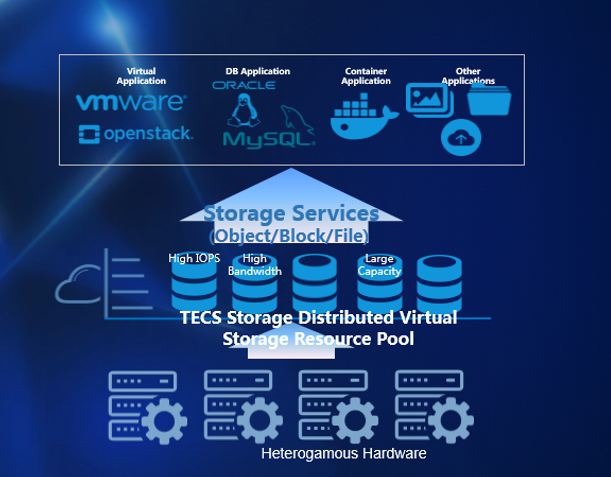 ZTE started to research open source Ceph in 2014, and it is one of the first batch of teams engaged in Ceph R&D in China. With many community expert developers, ZTE ranks top 3 in the global market and top 1 in China in three consecutive community commercial versions. ZTE Distributed Unified Storage Solution is a product of the close combination of open source software and commercial standards. With the comprehensive promotion of NFV in telecom cloud, the solution has been put into commercial use by dozens of operators around the world, creating continuous value for customers.

In 2019, ZTE made breakthroughs in the operator market and deployed distributed storage in the NFV resource pool of China Mobile. At the same time, ZTE successfully passed the IT private cloud procurement tests of China Mobile. The comprehensive market breakthrough in CT and IT of China Mobile fully demonstrated the innovation and technical strength of ZTE Distributed Storage Solution.

In the field of government enterprise cloud, ZTE Distributed Unified Storage Solution, which is currently applied in the largest government & enterprise market in China, provides storage services of more than 4,600T. From 2017 to 2019, more than 10 smart government and enterprise cities were used in the public security system.

In 2018, ZTE TECS CloveStorage was awarded the Best Open Source Product Award at the SDN/NFV World Congress held in Hague, Netherlands. SDN/NFV is one of the most influential exhibitions in the virtualization field. This award fully demonstrates the recognition of ZTE virtualization product technologies and commercial capabilities in the industry. 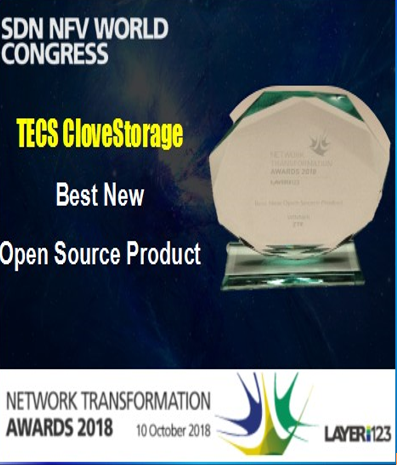 5G network has arrived. ZTE will continue to invest more in technologies and work with industry partners to build a more intelligent and reliable 5G core network, making it the first to enter the 5G Internet of Everything (IoE) era.