5G Core is the brain and hub of the network, providing users with key functions such as user access, authentication and authorization, policy control, network slicing, and capability exposure. Based on the service-based architecture (SBA) and cloud native, ZTE's fully converged Common Core product is intended to provide industry-leading full-scene product solutions for future-oriented service evolution and meeting requirements of IoE (Internet of Everything).

5G Core is a network with a brand-new architecture design. It introduces key design concepts and methods such as SBA (Service Based Architecture), stateless, network functionalization, and CUPS (Control and User Plane Separation). CUPS divides the network into the control plane and the user plane to implement the separation of network computing and forwarding. The core capability of user plane focuses on network forwarding, working as a forwarding highway that connects terminals, wireless networks, industrial applications, and the Internet. It directly determines the capability level of 5G networks and is the most critical component of core network.

With the rapid development of 5G high-bandwidth and low-latency services, the traffic gradually extends and flows from the regional center to the edge. A single User Plane Function (UPF) cannot meet the requirements for flexible commercial deployment of 5G. According to the service development trend, ZTE has designed a series of UPF/GW-U products to meet differentiated service deployment requirements of different areas and different traffic. 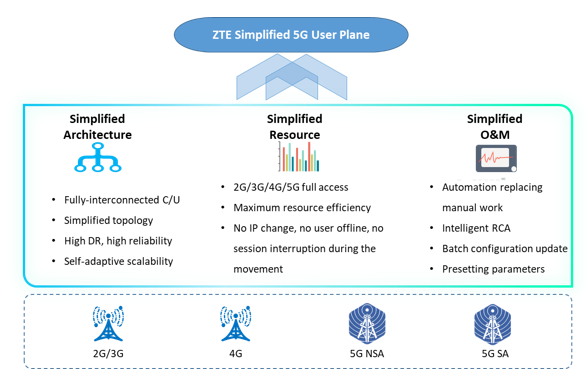 At the network architecture level, the full-connection networking between user plane and control plane is implemented, greatly simplifying the network topology and improving the reliability of the entire system. In the early stage of 5G network deployment, 5G traffic is growing rapidly, and 5G traffic increases rapidly in a short time. ZTE's user plane can dynamically join network service, be flexible and scalable, and implement real-time load balancing. This ensures that the entire network can adapt to external changes in real time.

In-depth integration is implemented on the resource layer to support accessing multiple radio systems at the same time. In addition, when users' radio systems change, the anchor point is unique. When the user moves under different radio technologies, as the unified user plane anchor point, ZTE UPF/GW-U can ensure that the user does not go offline and the session is not interrupted, thus creating the best user experience.

Simplified O&M is provided to solve operators’ O&M problems after the introduction of 5G networks. Because the 5G user plane has large traffic, wide distribution and many nodes and adopts the CUPS, the traditional O&M mode is difficult to meet O&M requirements of the complicated 5G network. By providing a series of automatic, intelligent and batch O&M means and tools, ZTE UPF/GW-U reduces manual intervention, presetting specifications, intelligent root cause analysis and batch configuration, to increase O&M efficiency by over 30%.

One of the key indicators to measure the quality of a 5G network is the user-plane forwarding capability, including throughput, forwarding delay, power consumption and cost per BIT. The traditional solution for improving user-plane performance relies on the number of CPU cores and the NIC capability. However, such solution that simply relies on hardware upgrade to improve performance is no longer sustainable. In addition, by using the software acceleration algorithm, the performance has reached a bottleneck, and can hardly be improved. 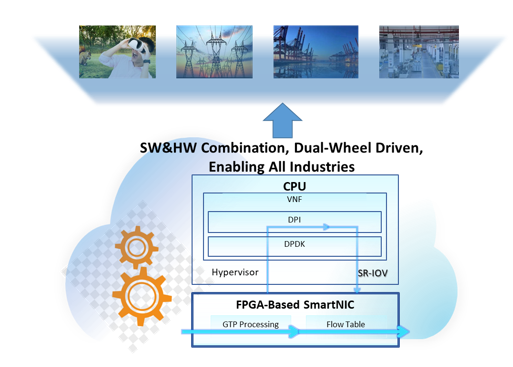 On the basis of software acceleration, ZTE UPF/GW-U first launched the FPGA-based Smart NIC acceleration solution in the industry. Through policy orchestration and combination of smart flow offloading technology, the GTPU traffic of the mobile network is unloaded from the traditional CPU processor to the Smart NIC on demand, and then forwarded at a high speed together by FPGA and acceleration NIC. The user-plane traffic is forwarded through hardware throughout the process, breaking through the bottleneck of current software acceleration algorithm. The performance can be up to several times of the traditional user-plane forwarding performance. At the same time, the forwarding delay can be reduced to 1/10, fully meeting the technical requirements of 5G application scenarios for ultra-high bandwidth and ultra-low latency, such as industrial control, IoV and UAV.

3. Various deployment forms to build the most full-scenario UPF in the industry

In a traditional 4G network, the deployment mode of the user plane is relatively simple and fixed, only involving SGW and PGW. After the network evolves to 5G SA, due to the introduction of such new technologies as network integration, distributed DC, CUPS, inter-UPF transmission and MEC, the 5G user plane deployment also presents characteristics of diversity, flexibility and componentization. The user plane network functions evolve from the traditional centralized deployment to hierarchical discrete deployment, and the deployment location of user plane gradually descends from central DC to regional DC or even edge DC.

Under the same product architecture, ZTE UPF/GW-U flexibly orchestrates network function forms to be deployed according to software configuration and deployment location. It can dynamically insert, update and delete UPFs as needed, and select the optimal traffic forwarding path at any time. In this way, it achieves a plug-and-play user plane which can be moved on demand. 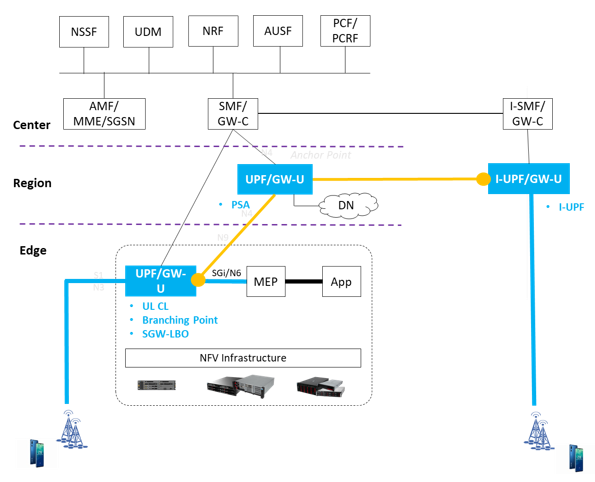 ZTE UPF/GW-U meets but is not limited to the following deployment forms:

It should be emphasized that, based on the design concept of compatible products, ZTE UPF/GW-U continuously expands its extension while fully meeting the current 3GPP R15 standards. On the one hand, it expands functions of 4G EPC SGW, to provide the SGW-LBO (Local Breakout) function to meet special application scenarios of 4G MEC, helping operators fully explore the value of existing networks  and create MEC applications applicable to 4G networks. On the other hand, I-SMF/I-UPF defined in the R16 standard is introduced in advance to deploy the ETSUN (Enhancing Topology of SMF and UPF in 5G Networks) rapidly, so as to solve the service continuity problem when the user moves in a wide range.

Compared with traditional networks, 5G user plane has new changes and new problems during the commercial deployment of 5G networks. We urgently need a simplified user plane that can be flexibly deployed in various deployment forms to meet coming diversified requirements of thousands of 5G industries. Under the fully converged Common Core framework, with its simplified design, leading hardware acceleration capability and full-scene deployment forms, ZTE UPF/GW-U will definitely promote the deployment of high-quality 5G networks for customers and industry partners.