Whether Deployment is Centralized when VoLTE is Virtualized?

In the legacy telecommunication network operation, the TCO is still high, the introduction of new technologies and new services is difficult, and the operation and maintenance efficiency is difficult to improve, which has been plaguing operators. When VoLTE encounters virtualization and performs centralized deployment, can it effectively solve the operational pain points? 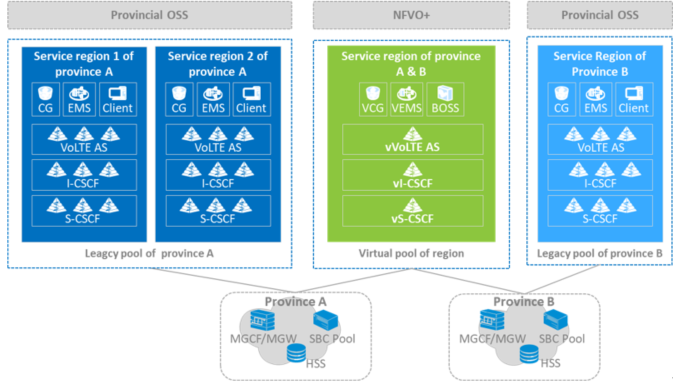 Its main advantages are intensification, meaning that both NFVI and VNF can implement centralized management and unified maintenance in the big region.

2. Provincial centralized deployment solution: The regional division and the core node construction are the same as the shared centralized deployment solution. However, inside the node, the vIMS control network elements are deployed and maintained by the province together with the legacy IMS network. The resource pool is organized by the virtual/real hybrid mode (It generally refers to the same manufacturer. The resource pools can be managed in virtual and independent modes for big provinces or different manufacturers), as shown in Figure 2. 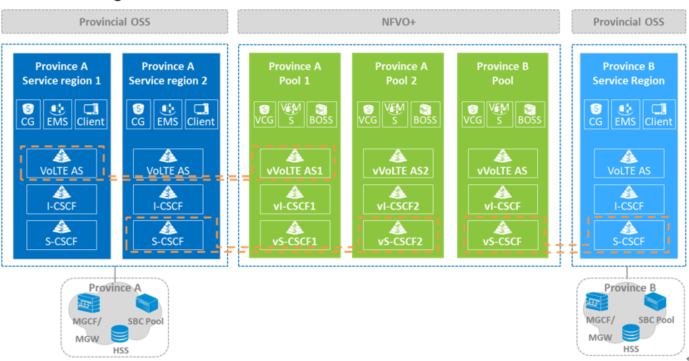 The main advantage of the solution is the true end-to-end isolation, such as user data, service, management, virtual machines, and even physical machines, and the introduction of new services can be operated by province.

Its main disadvantages are as follows:
1. OPEX: Because of NFVI centralized deployment and business management by province, end-to-end operation and maintenance requires the collaboration between big regions and provinces, increasing maintenance costs and complexity.
2. Resource utilization: The solution supports isolating virtual resources from physical resources, sharing resources, and deploying them as required. Isolation makes the management interface clearer, but resource utilization is reduced; sharing is the opposite.
3. Reliability: The impact of a single DC fault service is wide, and the double-DC fault has the full resistance risk of the whole network service.

The disaster tolerance mechanism of the two solutions are similar. Generally, the remote resource pool organization mode is used to implement remote geographical disaster tolerance and effectively respond to anomalies and disaster events for usual load balancing to ensure equipment availability, as shown in Figure 3 and Figure 4. 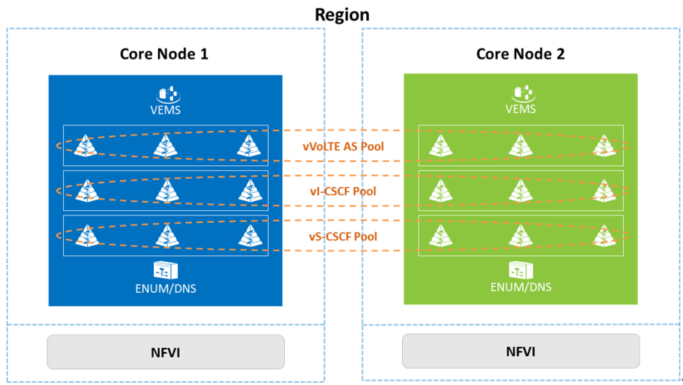 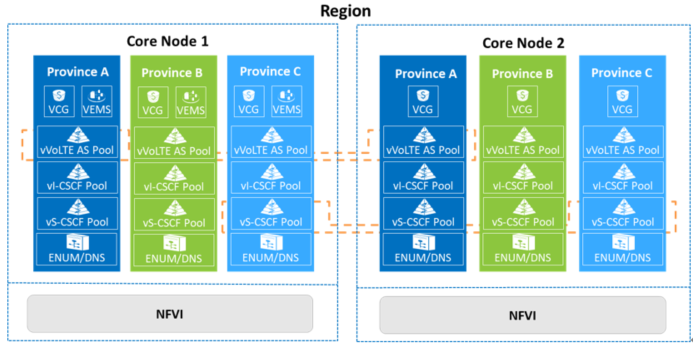 There are advantages and disadvantages to each of the two centralized deployment scenarios, which can be easily compared as follows. 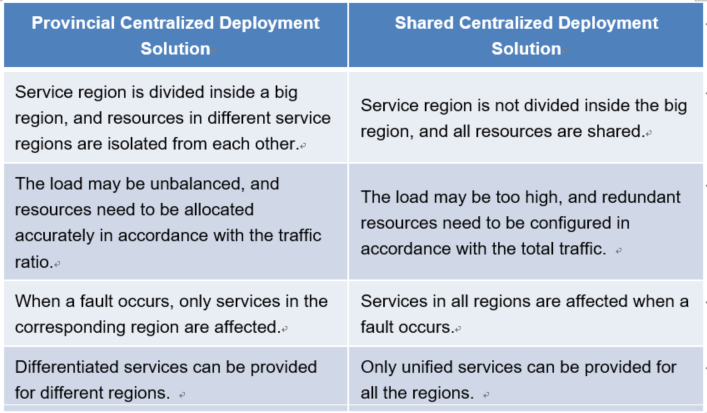 In the centralized deployment solution, the following issues need to be considered:

1. Network security: adopts general hardware, provides a comprehensive backup solution and a disaster tolerance mechanism, and solves problems such as processing capacity bottlenecks, data backup, and disaster tolerance.
2. Transmission delay: improves transmission network performance, and solves problems such as long distances between core nodes and edge nodes and complicated network interconnection.
3. Services provision: divides service logic and, isolates each other for security, and solves the problems of implementing special services and customized services.
4. Law and policy: Avoids the contents that are prohibited by laws and policies, and solves the problems such as regulatory risks.
Typical application cases

VoLTE network of Operator A

Operator A adopts a centralized deployment solution that is based on the shared mode and supplemented by provincial mode. The whole country is divided into three big regions: North, Central and South. Each region has two core nodes, managing several provinces respectively according to the principle of user and traffic balance. The disaster tolerance mechanism adopts a cool backup method.
The nodes are internally divided into several resource pools, which are initially shared by all provinces in the big region. With the expansion of the VoLTE network in the subsequent stage, the core nodes will allocate resources separately for the provinces with relatively large traffic, and will no longer share the resources with other provinces. .

VoLTE network of Operator B

Load sharing mode is adopted between nodes for disaster tolerance. If a node breaks down, only half of users are affected, the other node takes over the services quickly. The disadvantage is that the IMS call setup duration is increased and the EPC data service delay is increased. The impact of the latter is more obvious, but the test result is acceptable.

When constructing a multi-tenant vIMS network, Carrier C sets up two regions for five countries. Each region has one core node for centralized deployment of signaling plane NEs, which is virtualized NE and load sharing. Media-plane NEs are deployed at national nodes and isolated physically from each other to ensure user security.
The core node is configured with the CSCF, SSS, EMS, CG, and MANO.
The national nodes are configured such NEs as SBC, ENUM and MRFP.
The HSS, MGCF, MGW, and other existing NEs continue to be reused.

The use of this signaling and media separation architecture can avoid media detours, improve network efficiency, and easily accept national management.

In summary, the centralized deployment solution can save construction costs, improve user perception, and enhance service capabilities, thereby alleviating many problems faced by operators and promoting strategic transformation of operation and services.